Windows 7 is one of the most popular Windows operating systems ever to be released. But all good things come to an end it seems, and from January 14th, 2020, Windows 7 will no longer receive security updates, meaning that your systems, files and information could be at risk.

But with every challenge comes an opportunity. Windows 7 EOL gives you the chance to move on from your old platforms, or rather forces you to, opening the doors to newer technology and the infrastructure behind a modern workplace.

Moving the operating system is a painful experience, in most cases upgrading just adds to existing problems you may already be experiencing, as you migrate the issues with you. Formatting and stating with a clean slate are always the best option, but the headache to re-install and copy back your data, preferences and settings is a daunting and sometimes challenging task.

Some Windows 7 users may find upgrading to windows 10 is simply not possible, old hardware may not have driver support for windows 10, making your hardware redundant as well as the operating system. Those fortunate enough to be able to run Windows 10, may find their hardware simply below par and spending the money on an upgrade, simply a waste of money and a futile process for a slow computer that is on old and dying hardware as the end result.

Windows 8 users should have already upgraded to 8.1 as Windows 8 ended back in 2016 and anyone still using the basic windows 8, are at high risk of security and data breaches. Windows 8.1 has a bit of life left in it, scheduled to end in January 2023, but really is already seen to be at end of life.

Business users using Windows Server also find themselves affected by End of life operating systems in the coming year. 2008 Server R2 is also ending on the same date as Windows 7, January 2020. And 2011 SBS users also find the 2020 deadline looming. Both of SBS2011 component parts (Server 2008R2 and Exchange 2010) both end in January 2020. This can mean massive upheaval for businesses as the time and cost implications of server upgrades and migrations will be a massive factor to business budgets in the last half of 2019.

Office 2010 also sees its End of life looming, current October 2020, so 18 months before switching off, however with the various incompatibility aspects with windows 10, many users will have already jumped ship long before its official end date. Office 365 is the obvious migration path, due to price and features for current 2010 office users. 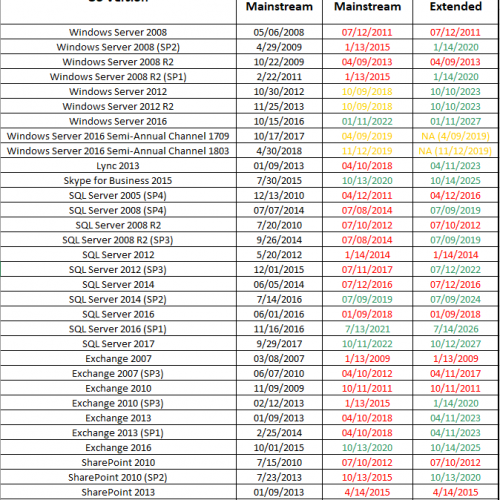 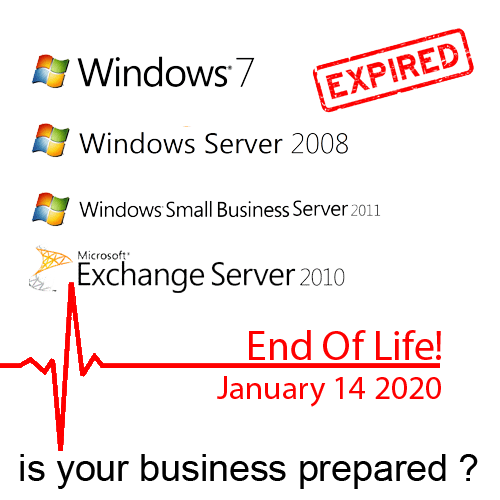